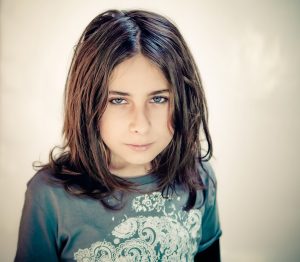 I met Arthur Horeanu virtually when I was asked to contribute to a collaboration on a Dream Theater song. French guitarist Romain Verghade used a drum part of mine which I had recorded a year before. Arthur took the vocal part and he blew everyone away with his presence.

Making of ‘Catch Me If You Can’

We talked about young talents from Romania before and we would like to introduce some more now: Arthur in Neverland is a young archetype of a Rockstar. His looks and his attitude are so spot on. He was a great performer and singer even before his voice break, meanwhile, he’s a teenager and he sounds really different. Check out one of his recent performances on ‘The Voice of Romania’

When we needed a singer for a duet Arthur was our obvious choice. It got even better for us when he suggested Patricia Rus as his duet partner, a neighborhood girl he had often performed with before. Both Arthur and Patricia are extremely professional. Thanks to both for their great work and a special thanks to Claudiu for his help arranging this collaboration and recording all vocal parts (audio & video)!

Patricia sings literally all kind of styles and she is incredibly versatile. Check out her live performance of a Whitney Houston classic:

There’s not a lot to say about ‘Catch Me If You Can’. It used to be an instrumental piece that I recorded together with my dad quite some time before we thought about an Original album. When we were looking for album songs later, we re-recorded the whole thing, just the 2 of us. My dad wrote a melody and some lyrics for Arthur & Patricia. Both live next to each other (in Arad, Romania), so they could record their parts together and send them over. Thanks again to both for committing to the project!!

Interview for the German STICKS magazine

How can I support you?

Some people think that YouTube pays me a lot of money because my channel has many views and subscribers, but unfortunately, most of those views refer to my drum covers of copyrighted material.

The advert money generated by those views goes straight to the copyright holders, so my YouTube income is quite small. In fact, my Patrons and Supporters keep this channel going. They help me to make a living playing music.

You can support my channel by commenting on my videos, sharing my videos or buying my products. If you are kind of rich or you have some spare money, you can also support me financially:

Or you can support me on a regular basis and join me on Patreon!

This website uses cookies to improve your experience while you navigate through the website. Out of these, the cookies that are categorized as necessary are stored on your browser as they are essential for the working of basic functionalities of the website. We also use third-party cookies that help us analyze and understand how you use this website. These cookies will be stored in your browser only with your consent. You also have the option to opt-out of these cookies. But opting out of some of these cookies may affect your browsing experience.
Necessary Always Enabled
Necessary cookies are absolutely essential for the website to function properly. This category only includes cookies that ensures basic functionalities and security features of the website. These cookies do not store any personal information.
Non-necessary
Any cookies that may not be particularly necessary for the website to function and is used specifically to collect user personal data via analytics, ads, other embedded contents are termed as non-necessary cookies. It is mandatory to procure user consent prior to running these cookies on your website.
SAVE & ACCEPT